Well, this is just sad. Do you ever have things that you just keep putting off and the longer you put off, the more guilty you feel about starting back up? I know; it sounds crazy but that is what has happened with my blog. I got out of the habit of posting and before you know it, five months had gone by!

The good news is, I'm back at it. Now I just hope you'll jump back in with me!

So, what have I been doing the last five months, you ask? Sadly, not much! Posting on this blog is a huge motivator for me, and so hopefully this re-emergence will inspire me to get into action. But, I have done a few things and will be posting about them over the next few weeks.

First, let's start with a project I did one weekend while Landon went out of town. It's actually kind of dangerous for him to leave because that's usually when I decide big changes need to be made. I guess I just have too much time to think while he's away!

This particular weekend I decided it was high time to paint the entry way. When we moved in it was tan, or as I like to call it, band-aid, because that's what it reminded me of. 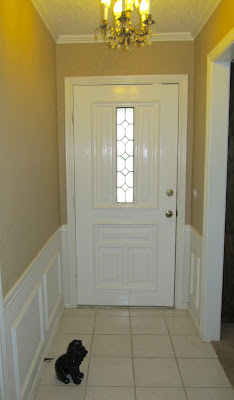 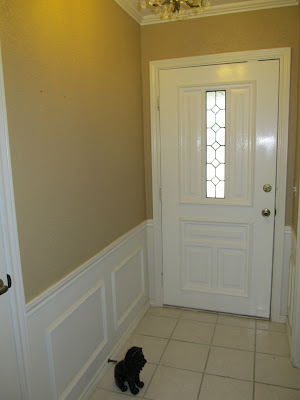 I decided that in order to flow well with my dining room, which you may remember we painted a dark gray, I would paint the entry way a lighter shade of gray. And so, having been inspired by all the "light and airy" paint colors I have seen lately, I decided to pick a pale shade.

Now, my first mistake was rushing this project. I literally decided on Friday I would paint over the weekend. That would have been fine except for the fact I didn't have a color picked.

I threw up a few paint swatches on the wall. After looking at them with the door open and natural lighting coming in as well as with the overhead light, I finally picked Benjamin Moore's "Horizon." Then, I headed to Home Depot to have them color match it. Since I didn't want to have to paint more than one coat, because I was being lazy, I opted for Behr's paint and primer mixture (actually, I decided on Glidden's brand but the machine wouldn't mix it so Home Depot gave me the more expensive Behr paint for the same price ... score!).

So, on Sunday, I prepped the room and began painting and it soon became apparent that perhaps I picked a color too light and airy. 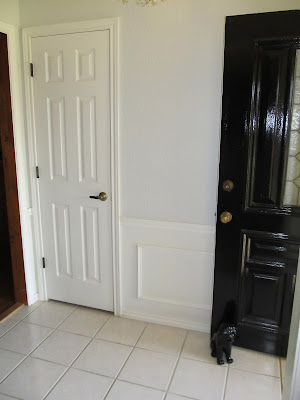 I thought, as with my past painting fiascoes, I would let it sit and dry, hoping it might darken.

So, when Landon returned home the next day, I asked him what he thought. He didn't say much, which indicated he wasn't a fan. So, the next weekend, I thought I'd give it a second coat -- the one thing I was trying to avoid -- thinking that might help.

So, at this point, I decided I, once again, missed the mark on choosing paint colors. Seriously, between this and the bedroom "cotton candy blue," I'm about to give up.

But, I've decided the light gray is not something I can't live with. It may not be exactly what I wanted but it's not horrible. Plus, the bottom wainscot needs a new coat of white paint, and I do think that might help.

So, here is my new entry way in all it's glory ... in some of these pics, it looks white. There just really isn't enough contrast, but it is what it is! 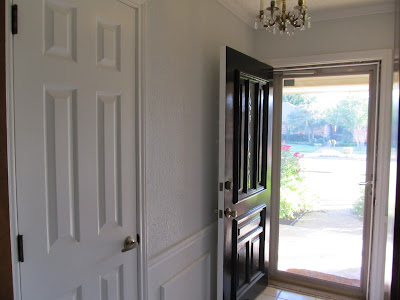 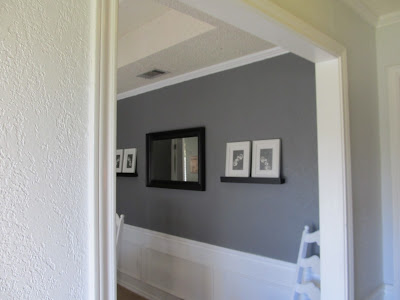 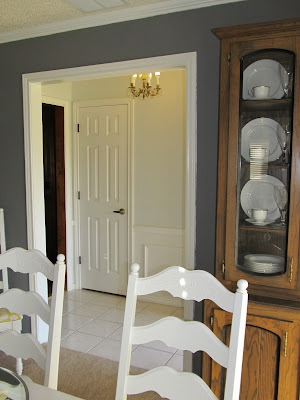 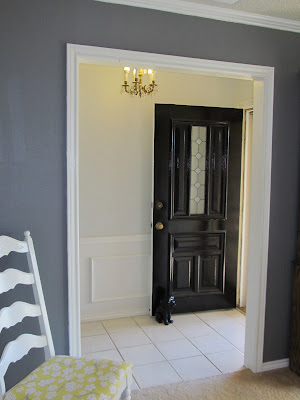 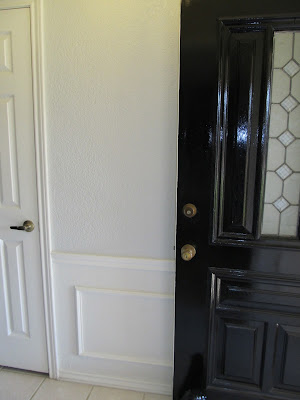 I can tell you the room really lightened up, which was my goal! Oh, and see the gold chandelier? Let's just say that will be receiving a fresh coat of black spray paint very soon!

Have you found any great paint colors lately? My bedroom still has six different colors on the wall. It's about time to make a decision, and I'd love to know what has worked for you.