Mirror, Mirror on the Wall

It's been an unusually strange week. On Tuesday, we got caught up in the nationwide winter storm and received an inch or two of ice. That created one complete day of being "ice-bound" inside. Wednesday, I ventured, very slowly, to work. I never made it over 20 mph and my normally 20-minute drive took 40 minutes. By Thursday, I had a client in town and ended up driving, still slowly, all over Dallas. I told one of my coworkers that I was getting way too comfortable driving on sheets of ice!
Last night, before going to bed, the weather man predicted we could receive one to three inches of snow. Well, imagine my surprise when I woke up to six inches of white, fluffy snow!

Wow! So, we had another day inside. Landon did venture out to try and find some firewood (though the store was sold out) and purchase some milk. Tomorrow is supposed to be our first day since Monday to get above freezing, so I'm hoping some of this wintry wonderland will finally melt away.
The ironic thing is that just last weekend, it was in the 70's and we were wearing flip flops and eating outside! The cold weather has definitely affected my productivity. I'm definitely ready for warmer weather.
Tonight, we finally decided to do some decorating with a purchase from last weekend's trip to IKEA.
While we were painting the dining room, one of our small mirrors ended up laying in the floor in this space in our office/craft room: 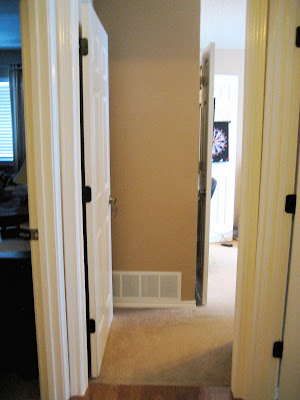 After it sat there for a week, we decided that we really like it! The space can be seen from the hallway leading from the living room to the bedrooms. It really opened up the space. 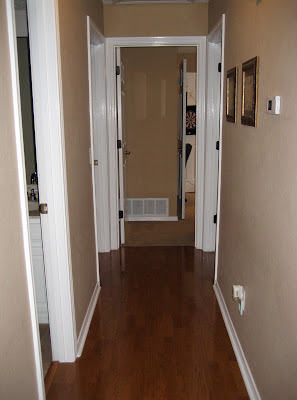 So, we went on the hunt for a mirror to put there. Before our IKEA trip, I browsed the website and considered this "Mongstad" mirror:

But when we were in the store, we measured it and determined it definitely wouldn't fit in our space. I didn't think we were going to find anything, until we walked up and saw this one:

It's the "Hemnes" and it was perfect! So, we made the purchase and brought it home.
We attempted to hang it up using Hercules hooks.

If you have never used these, they are great. They will support a large amount of weight. Landon's sister and mom originally found them. We've almost used all the ones they gave us so I guess we'll be buying more soon!
I say "attempted" because we got one hook in but when we went to put in the other, it just wouldn't go. Perhaps we ran into a stud or some other weird issue, but it just would not go in. So, we ended up using a normal screw on that side. But, we've never had an issue with the Hercules hooks before, so I still recommend them.
And, here's what it looked at in the end: 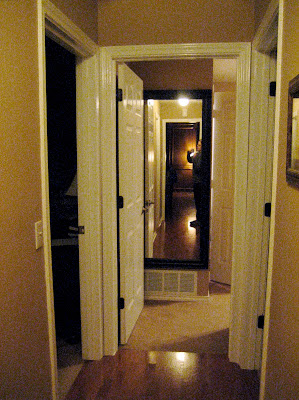 Sorry the pic's not the best. I had lost my "natural light" by the time I got ready to take the picture. (Notice I was trying to stay out of it, too.) Plus, I really need a new camera.
Anyway, it actually looks pretty good! Plus, I have a new place to review my outfits before leaving the house.