The shells I had bought at the Estate Sale a few months back have been sitting in my "office" still in their bags. So, I decided it was time to figure out what to do with them. I actually have a vase that Landon had bought me when we were dating from Pottery Barn. I wanted this vase so badly because in the Pottery Barn catalog, they had a fish swimming in it and I just thought that was so cool. Then I thought through the practicality of having to clean it and decided I would forgo that idea. So, it's been sitting on my black bookshelf in the sunroom holding some weird green "stick things." Well, not anymore.
I removed the "stick things" and voila. 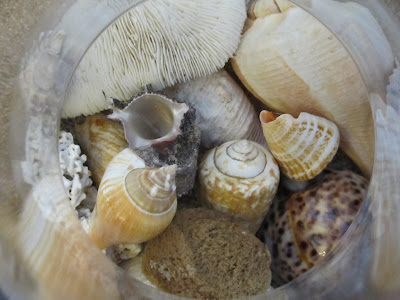 It looks nice and pretty sitting on my black bookshelf. I'm also still looking for ideas for my sunroom. Here are a few things that have recently caught my eye.
Source: twiddlerhouse.blogspot.com via Kristin on Pinterest

What about you? Anything caught your eye lately?